Kurian: A karmayogi with empowerment of people as religion


Dr Kurian, in my opinion would rank among the top Indians in the post -independence India, whose contribution to the betterment of lives of our countrymen, particularly the farmers, has been immense.
His efforts have resulted in transforming India from a milk deficient and milk starved nation to become the largest producer of milk in the world. His famous expression is “I am in the business of empowerment. Milk is just a tool in that”.


Dr Kurian’s story of entry into milk and cooperative sector and his Anand saga is very well documented. His journey from being a young technology man having reluctantly come to the interiors of Gujarat to become a messiah of millions of villagers is truly inspiring.
I am personally amazed and impressed by the fact that how a combination of true co-operator and an open minded technocrat having a common desire to empower people can achieve the unbelievable.
For Shri Tribhovandas Kishibhai Patel, a cooperative leader and a true Gandhian with a strong desire to improve lives of villagers in Gujarat through cooperatives and for Dr.Kurian, then a young technocrat finding himself to be in a nondescript place called Anand, coming together has been a game changer, not only for themselves, but for the State and the Country.
It would be our fortune if we get many more such combinations of cooperative leaders and technocrats who can take on the might of multi nationals and corporate, in coming years when India is expected to grow into an economic powerhouse.


Anand model of Dr Kurian is the best alternative to corporate and for ensuring equitable distribution of fruits of growth.
While he empowered millions of his countrymen through cooperatives, the fact that Dr.Kurian chose milk as the vehicle of empowerment ensured that majority of those empowered were women.
“White Revolution” by the most famous “Milkman” known in history is a story that will make every Indian proud.
Dr Kurian’s discomfort with corridors of power and bureaucracy is well known. Late Shri Lal Bahadur Shastri as PM, impressed with Amul Model, wanted Dr Kurian to create an institution that would replicate the model in other parts of the Country. This was the genesis of National Dairy Development Board (NDDB).
While accepting the responsibility of setting up the institution, Dr.Kurian put a condition that the Board be headquartered in Anand, away from the bureaucratic interference of Delhi, to which Shastriji readily agreed.
NDDB played a very important role in creating awareness about the Amul model and inspired them to replicate it in other states. In later years he handed over reins of the Board to his protégé Ms .Amrita Patel, who has chartered a course for NDDB in a style which has been different from Dr.Kurian’s, but nevertheless successful.


Dr Kurian was also instrumental in creating another fine organisation, IRMA (Institute of Rural Management),that has developed over the years into one of the respected management institutes in the country.
It was an unequal battle in 1949 when the milk cooperatives in Anand decided to take on the then market leader in dairy products, called POLSONS which was known to be exploiting farmers, by creating a new brand image AMUL. They succeeded hugely and wiped out the corporate which was a household name.
Dr. Kurian also ensured that the biggest beneficiary out of the business of milk and milk products was the farmer who sold the milk to his local cooperative. Although today a large number of private players have entered the dairy sector, but nevertheless the system of pricing that benefits the farmers that has been benchmarked by Amul and NDDB is being followed by all.
Dr.Kurian will be remembered by posterity as a person who not only believed in empowerment as instrument for growth and well-being of masses, but he also emphatically proved its efficacy by his deeds. The structures and systems he has created stand testimony of his dedication and his conviction.
May the Soul of this tireless crusader for empowerment rest in peace and let us all the co-operators rededicate ourselves to the cause of economic empowerment of the less privileged brothers and sisters through cooperatives. 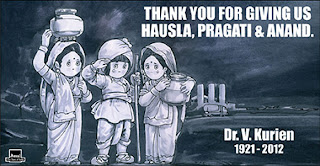 Email ThisBlogThis!Share to TwitterShare to FacebookShare to Pinterest
Labels: Kurian: A karmayogi with empowerment of people as religion