Showing posts from June, 2012
Show All

It’s a tough time for the airlines, with passenger and cargo traffic down and projections of fewer air travelers this summer as the nation struggles to recover from a recession.
That makes it a challenge for airports to hold onto the air service they have, much less be able to persuade airlines to introduce new service.

“It is harder to bring in more service,” Ahmad said. “If people are not …
Post a Comment
Read more

Creating the future together with Swiss Air

Even in the time of Global Aviation Recession  SWISS is looking for employees who will make their mark in our multi-cultural teams. People who will encourage open and collaborative dialogue together with constructive criticism. Team members who will achieve mutual goals with dynamism and energy. Welcome to SWISS Air.

The cockpit crew of a SWISS Airliner consists of at least two people: the Captain, also called the Commander, is ultimately responsible for his or her crew, operation and the aircraft. The First Officer (or Co-Pilot) is Second-In-Command and supports the Captain in all matters. It is routine for both captain and first officer to fly the plane in turns.

No day is ever quite the same

An Airline Pilot’s field of activity is very varied and begins with flight planning, weather analysis and calculating take-off: an in-depth knowledge of the aircraft technology is therefore essential. As the person in charge and decision-maker in a complex technical environment, th…
Post a Comment
Read more

June 30, 2012
We often equate casual dress with more relaxed activities, so if you’re trying to accomplish something – dress up!


Put on a proper Business Suit or somewhat formal outfit, including shoes and socks.


Do your hair, shave, and put on cologne or perfume – whatever you would normally do for a social or business event.


This gets your mind into action mode and clears away any tendency to slack off.

Pilot one of flydubai’s brand new Boeing 737-800s and fly with the Middle East’s fastest growing airline
We’re always on the look-out for experienced pilots who want to progress their careers at flydubai.
If you meet the minimum requirements, flydubai can offer you a career in a growing company, flying a diverse network of routes in some of the most modern planes in the sky.
We’ll help you develop your skills and provide a competitive salary as well as employee benefits for you and your family.

Before you apply, check the minimum selection criteria below.
All pilots
Fluent in English to ICAO level 4 or above.
Hold a ICAO ATPLY certificate.
Hold a 1st Class Medical certificate from ICAO.
Eligible for a UAE residency visa.
B737 type rated captains
B737-300 to 900 (NG/EFIS) endorsed within the last 24 months.
At least 5,000 hours total flying time.
At least 1,000 hours in command of B737-300 to 900 (NG/EFIS) type aircraft.
At least 1,500 hours in command of a multi-crew, multi-engine ai…
Post a Comment
Read more

Its time for Air India Pilot to take right decision. 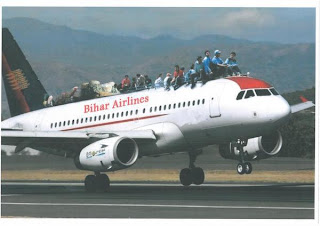 India is also suffering from Global aviation Reession and
Two more Air India pilots were shifted to hospital today after their condition deteriorated on the sixth day of their indefinite fast here and in Mumbai.

So far, five Pilots -- three in Delhi and two in Mumbai -- have been hospitalised since they began their hunger strike on Sunday.

About 12 pilots in Mumbai and 15 in Delhi are on indefinite hunger strike from Sunday. Over 400 IPG pilots have been on strike since May 7.


The Indian Pilots' Guild (IPG), leading the 53-day long strike and the hunger strike, again criticised the management for not taking any initiative to resolve the impasse.

"It is clear that the Ministry of Civil Aviation is now taking all the decisions pertaining to Air India and the AI management has a negligible role to play," IPG said in statement, adding that …
2 comments
Read more 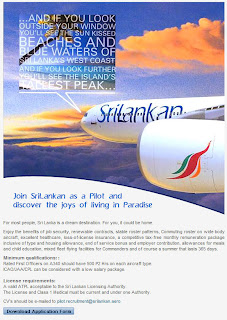 Investing in a career at SriLankan Airlines promises a wealth of opportunities, a challenging and sophisticated work environment and the chance to work in one of Sri Lanka's most recognised institutions. On this section of our website, you can view the current job vacancies at SriLankan Airlines and the job descriptions. If you wish to apply for a particular job, you can email us regarding that job. If you think you have the passion and the drive to be a part of the team at SriLankan, we invite you to explore our world.
If any of the jobs below appeal to you, click on the links to read the job description and email us about it.

Join SriLankan as a Pilot and discover the joys of living in Paradise.
For most people, Sri Lanka is a dream destination. For you, it could be home. Enjoy the benefits of job security with an expanding Nati…
1 comment
Read more

June 29, 2012
New aircraft that embody a host of innovations have been rolling off the assembly line, transforming the way people travel and transport goods. However, as the global recession worsens and credit tightens, many experts worry that new aircraft development will suffer.

Aviation is in the midst of enormous prosperity; much of this growth is due to historic technological advancements in fixed-wing aircraft design and manufacturing. However, the global recession and stratospheric oil prices loom as a threat. In the last few weeks, four airlines have filed for bankruptcy, with perhaps more to follow. What does it all mean for new aircraft? These questions will be answered by a forthcoming webinar, New Aircraft, New Opportunities.


A confluence of market demands is generating exciting opportunities for new fixed-wing aircraft around the globe, such as Very Light Jets (VLJs), a new breed of transport that promises to revolutionize travel.


Greater success and satisfaction are on the radar screen for professional Aviators who land their talents at Delta. Ensuring that our passengers arrive at their destinations safely and on-time, our pilots earn their wings while helping our airline move full speed ahead.

It’s time for your pre-flight check. Delta Air Lines is looking for Pilot candidates who meet our high standards of aviator skills, safety, professionalism, and customer focus. If you are interested in joining our team of professional Pilots, you may apply or update your existing application via AirlineApps.com.

Delta Airlines of USA recruiting Pilots for first officer positions. As a new Delta first officer, you have an opportunity to initially be assigned to a MD88/90, a 737NG, or even a 757/767 aircraft type among our fleet of more than 700 aircraft. To qualify for employment as a pilot with Delta you must…
2 comments
Read more

We can Do much Faster

June 28, 2012
If you think it will take an hour to finish a particular task or goal, make it your mission to finish it in 30 minutes.


If you think you’re capable of a certain amount of productivity, push yourself to increase that output by at least half.


Most of us have a terrible habit of coddling and pampering ourselves rather than pushing ourselves to be better and do better.


Deciding to take it to the next level can motivate you to keep doing that and blast through any feelings of procrastination.

Whether a Captain, a First Officer or Relief Pilot, an Air Canada pilot's number one priority is to conduct each flight safely with due consideration to passenger comfort and on-time performance.

While the typical work month consists of approximately 80 hours of flying, pilots spend many additional hours on such ground duties as preparing flight plans, readying the aircraft for departure, and completing post-flight reports. A day's work may vary from a long-range international flight to a sequence of shorter domestic flights. Reserve duty, in which the pilot is "on call", may also be assigned.

Air Canada pilots operate out of one of the four crew bases: Montreal, Toronto, Winnipeg or Vancouver. Base preferences are awarded in seniority so pilots must be willing to relocate as assigned. Pilots typically begin their career as a First Officer on domestic aircraft or as a Relief Pilot on long-range, international flights.