From teeming Times Square in New York City to an Asian capital hosting its first public New Year's Eve countdown in decades, the world looked to the start of 2013 with hope for renewal after a year of economic turmoil, searing violence and natural disasters.

Fireworks, concerts and celebrations unfolded around the globe to ring in the new year and, for some, to wring out the old.

"With all the sadness in the country, we're looking for some good changes in 2013," Laura Concannon, of Hingham, Mass., said as she, her husband, Kevin, and his parents took in the scene in bustling Times Square on Monday.

A blocks-long line of bundled-up revellers with New Year's hats and sunglasses boasting "2013" formed hours before the first ball drop in decades without Dick Clark, who died in April and was to be honoured with a tribute concert and his name printed on pieces of confetti.

Security in Times Square was tight, with a mass of uniformed police and plainclothes officers assigned to blend into the crowd.

With police Commissioner Raymond Kelly proclaiming that Times Square would be the "safest place in the world on New Year's Eve," officers used barriers to prevent overcrowding and checkpoints to inspect vehicles, enforce a ban on alcohol and check handbags.

Benjamin Nadorf, 4, fools around with his new glasses while waiting for the New Year party in Times Square in New York city on Monday, Dec. 31. One million people are expected at Times Square for the countdown. (Seth Wenig/Associated Press)
Syracuse University student Taylor Nanz, 18, said she and a friend had been standing in Times Square since 1:20 p.m. ET Monday.

They hadn't moved from their spot "because there's a bathroom a block and a half away, but if you leave, you lose your place," she said, shivering behind an iron barricade with a clear view of One Times Square, the building where the crystal ball hovered.

In Canada, annual outdoor festivities will feature musical and other acts at popular partying locations such as: 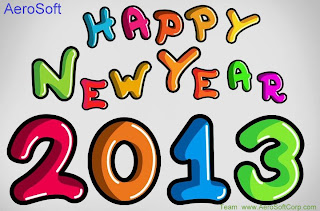 Organizers said about 90,000 people gathered in a large field in Rangoon, Burma, sometimes known as Myanmar, for their first chance to do what much of the world does every Dec. 31 — watch a countdown. The reformist government that took office last year in the country, long under military rule, threw its first public New Year's celebration in decades.

"We feel like we are in a different world," said Yu Thawda, a university student who went with three of her friends.

Pope's 2013 message
Pope Benedict XVI has marked the end of a difficult year by saying despite all the death and injustice in the world, goodness prevails.

Benedict celebrated New Year's Eve with a vespers service Monday in St. Peter's Basilica at the Vatican to give thanks for 2012, saying it's tough to remember that goodness prevails when bad news — deaths, violence and injustice — "makes more noise than good."

Taking time to meditate in prolonged reflection and prayer can help "find healing from the inevitable wounds of daily life," said the Pope, whose 2012 was full of highs and lows, including a successful trip to Mexico and Cuba, but also the betrayal of his butler, convicted of stealing Benedict's personal papers and leaking them to a journalist.

On Tuesday morning, Benedict celebrates a New Year's Day Mass, which the Catholic Church celebrates as its world day of peace


The atmosphere of celebration was muted in some places with concern.

Europe planned scaled-back festivities and street parties, the mood restrained — if hopeful — for a 2013 that is projected to be a sixth straight year of recession amid Greece's worst economic crisis since the Second World War. More than 22,000 revellers in the Madrid square celebrated the arrival of the new year under umbrellas as rain fell steadily.

Hotels, clubs and other sites in New Delhi, the Indian capital, cancelled festivities after the death of a rape victim on Saturday touched off days of mourning and reflection about women's safety. In the Philippines, where many are recovering from devastation from a recent typhoon, a health official danced to South Korean rapper Psy's Gangnam Style video in an effort to stop revellers from setting off huge illegal firecrackers, which maim and injure hundreds of Filipinos each year.

And even in Times Square, some revellers checked their cellphones to keep up with news of lawmakers' efforts to skirt the fiscal cliff combination of expiring tax cuts and across-the-board spending cuts that threatened to reverberate globally. And the elementary school massacre in Newtown, Conn., and Superstorm Sandy mingled into the memories of 2012.

"This has been a very eventful year, on many levels," Denise Norris said as she and her husband, the Rev. Urie Norris, surveyed the crowd seeking to jam Times Square for a countdown show with Ryan Seacrest as host and musical acts including Taylor Swift, Carly Rae Jepsen, Neon Trees, Flo Rida and Pitbull.

About a block away, Army Sgt. Clint Evanoff waited in a black suit, red vest and red tie to get into Times Square with a couple of his friends from his unit at Fort Drum, N.Y. Evanoff, 20, is scheduled to leave for Afghanistan, his first deployment, in about two weeks.

Looking ahead to the new year, "I'm just hoping to make it back," he said.

Elsewhere, too, hopes for 2013 were a mix of personal and political. In Boston, communications writer and editor Colin O'Brien, 25, said he was optimistic that the nation had realized it was time to make tough decisions about its finances and policy and that there might be "more common ground than people are willing to admit or accept." In Harrisburg, Pa., warehouse worker Adam Gassner, 43, had more internal goals: "hoping to continue to get myself back on my feet."


Lavish fireworks displays ushered in 2013 across the Asia-Pacific region on Tuesday, and Europe was holding scaled-back festivities and street parties in the hope of beginning a new year that will be kinder to its battered economies.

Asian cities kicked off New Year's celebrations in style and an atmosphere of renewed optimism, despite the "fiscal cliff" impasse of spending cuts and tax increases threatening to reverberate globally from the United States.
Huge fireworks lit up skylines in Sydney, Hong Kong and Shanghai, and even the once-isolated country of Myanmar joined the countdown party for the first time in decades.

Celebrations were planned around the world, including the traditional crystal ball drop in New York City's Times Square, where 1 million people were expected to cram into the surrounding streets.

In Russia, Moscow's iconic Red Square was filled with spectators as fireworks exploded near the Kremlin to welcome in the new year. Earlier in the day, about 25 people were reportedly arrested in Moscow for trying to hold an unsanctioned demonstration. But President Vladimir Putin gave an optimistic New Year's Eve address, making no reference to the anti-government protests that have occurred in his country in the past year.

"We believe that we can change the life around us and become better ourselves, that we can become more heedful, compassionate, gracious," Putin said, according to the ITAR-Tass news agency.

In Australia, a balmy summer night was split by 7 tons of fireworks fired from rooftops and barges in Sydney, many cascading from the city's Harbor Bridge, in a $6.9 million pyrotechnic extravaganza billed by organizers as the world's largest.

In Myanmar, after nearly five decades under military regimes that discouraged or banned big public gatherings, about 90,000 people experienced the country's first New Year's Eve countdown in a field in the largest city of Yangon.