They Rape her in Delhi, they send her to Singapore to get killed, then the PM comes and says that he ain't gonna celebrate New Year due to compassion, the media says that her organs are all failing, the culprits order their Biriyanis , the judges don't know whether they are fastrack or not, the public don't know what to do cause protesting and candle lighting have been diverted to a constables death.


Anna Hazare and Kejriwal are missing as usual along with Raj thackeray during a crisis.

People are still watching the cricket match as Dabanng 2 isset to make 200 crores.

Oh , in the meanwhile 16 other rapes have been reported, 5 in delhi as well. As usual nobody cares. Women you have no hope for safety in this country. Save yourselves if you can. Its upto you to make sure 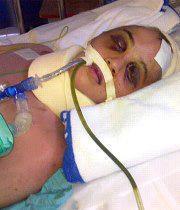 Singapore, Dec 29 (IANS) A young woman who was flown to Singapore after her brutal Gang-Rape and torture in the Indian capital died here early Saturday, the Mount Elizabeth Hospital announced.
The victim, whose name has not been revealed, passed away "peacefully" at 4.45 a.m. with her distraught family and Indian Diplomats by her side, hospital official Kelvin Loh said in a statement.
"We are very sad to report that the patient passed away peacefully at 4.45 a.m.,"
Chief Executive Loh said. "Her family and officials from the high commission of India were by her side."
The 23-year-old woman suffered multiple-organ failure after she was raped by six men in a moving bus in Delhi for about 40 minutes Dec 16 and dumped her by a roadside.
Her male friend was also badly beaten up and thrown out of the bus.

All six accused, including one who is said to be juvenile, have been arrested and are in Delhi's Tihar Central Jail.

Authorities in India shifted the woman, who had been on ventilator support since her rape, to Singapore Thursday in last ditch attempt to save her life.
"Despite all efforts by a team of eight specialists in Mount Elizabeth Hospital to
keep her stable, her condition continued to deteriorate over these two days," Loh
said.

"She had suffered from severe organ failure following serious injuries to her body
and brain.
"She was courageous in fighting for her life for so long against the odds but the trauma to her body was too severe for her to overcome."
B.D. Athani, medical superintendent of Delhi's Safdarjung Hospital, said the woman had been speaking to her mother and other family members earlier, giving the impression that she would somehow survive.

But her condition deteriorated rapidly after the operation, with a fatal infection spreading to her chest, lungs and intestine, he said.
India's High Commissioner to Singapore, T.C.A, Raghavan, said the woman's family was "shattered".
"The scale of her injuries (was) very great," Raghavan told the media.
"It was very trying for the family. The girl of course was unconscious...
"I must say they (the family) bore the entire process with a great deal of fortitude and a great deal of courage."
He said arrangements were on to take the body to India in line with the family's wishes.
The horrific gang-rape, in which the rapists used an iron rod to torture her, triggered angry demonstrations across india against growing sexual crimes against women.