Two men killed in the crash of a two-seat, custom-made experimental plane near Byron on Tuesday have been identified, the Contra Costa County Sheriff’s Office said Friday.

The single-engine, Glasair III plane, owned by Behne, was heard whirring overhead by a witness before it fell in a corkscrew dive and crashed into a farm field shortly before 2 p.m. Tuesday near Marsh Creek Road and Bryon Highway. 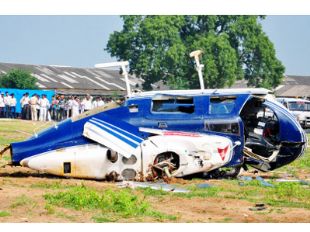 The National Transportation Safety Board and the Federal Aviation Administration are investigating the crash.

Earl Hibler, a pilot and longtime friend of Behne, said Friday that he spent much of Thursday at the crash site with two others picking up pieces of the plane to return what is left to the Funny Farm airstrip, the private airport that Behne owned in Brentwood.

“It was a long and grueling day,” Hibler said. “When your best friend dies and you have to pick up the wreckage, it’s tough.”

Hibler added that he himself was among those who helped Behne build the plane in 2008, and Hibler said he had flown it himself many times.

Behne and Strobel were longtime friends and avid pilots, according to Behne’s son, Eric Behne. They also were accomplished engineers.

Strobel was the owner and namesake of L.D. Strobel Co. Inc., of Concord, a wireless and utility construction company that has completed 5,000 projects, including communications towers in Hawaii and San Francisco, since its founding by Strobel in 1987, according the firm’s website.


Strobel’s most recent projects included cell towers built on Treasure Island and atop the parking garage of the South San Francisco BART station.

A person who answered the phone at Strobel’s company declined to comment on the founder’s passing.

Hibler said he did know Strobel well, but that Strobel was part of a group of airplane race fans that included Behne who drove to Nevada to watch Hibler compete in the Reno Air Races.

Behne owned about a dozen aircraft at the Funny Farm airstrip, Hibler said.

Eric Behne said that his father, who started out as a pilot at age 16, piloted the plane the day of the crash.

His father took off from the private Funny Farm airstrip, at 2600 Penny Lane in Brentwood, with Strobel for a short flight for fun, he said.

David Behne had a long career as an aerospace and communications engineer, having worked on engines for the Space Shuttle program at the aerospace firm Rocketdyne and on airborne lasers for Lockheed Martin.

Behne was recently employed at Space Systems/Loral in Palo Alto, where he worked on commercial satellites used by television companies.

Eric Behne said his father flew almost every day, including daily commutes from his airstrip in Brentwood to the Palo Alto Airport on his way to work at Space Systems/Loral.

Shekhar Gupta
CEO
Capt. Shekhar Gupta [ Pilot, DIAM, M.Ae.S.I., MAOPA [USA] ]
shekhar@aerosoft.in
Blog : http://shekharaerosoft.blogspot.in/
Shekhar is a Professional Pilot with more then 8 years experience of Flying on 14 different types of Air crafts in 10 different countries with accident free flying record. Shekhar is good in Flying Training as well as in Ground class for Pilots. Shekhar started his flying career from Skycabs [Colombo ] and worked for many Airlines Training Companies from different part of the world. He trained more then 350 Pilots who are flying world wide. He is a member of Aircraft Owners & Pilots Association [ USA], Royal Society of Aeronautics [ UK], Delhi Flying Club, Aeronautical Society of India, MP Flying Club Indore, Aeronautical Research Society. He is a frequent flyer on AA, Air India, British Airways, Cathey Pacific, Delta Airlines, Emerites, Ethihad, Jet Airways, Kingfisher and many more. Shekhar is an active member of www.MissionToCanada.com  set up by Govt. of Canada and Air Transport Association of Canada.
His recent passion is Aviation SEO for which he takes classes for IIT & IIM students in India and others in abroad. And www.AirAviator.com  a new proposed virtual Air Charter Services.