Captain Albert Ueltschi Pilot who founded FlightSafety , has died. at 95. 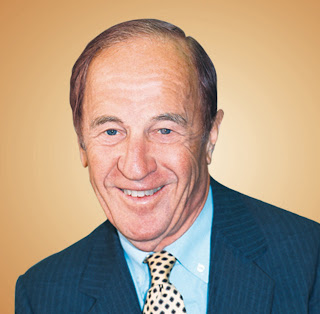 Albert Ueltschi, a Pilot who founded Biggest Aviation Training company FlightSafety in 1951, expanded it into an international powerhouse and sold it to Warren Buffett for $1.5 billion, has died. He was 95.

He died on Oct. 18 at his home in Vero Beach, Florida, according to a statement from the company. No cause was given.

As pilot of Pan American’s first corporate plane -- his regular passenger was company founder Juan Trippe -- Ueltschi hit upon the idea of opening a testing and training center for the booming aviation industry in the 1950s.

That company today is FlightSafety International Inc., which bills itself as the world’s leading aviation-training company, teaching pilots, aviation mechanics, flight attendants, dispatchers and others each year.

Based at New York’s LaGuardia Airport, the company runs training centers and flight simulators at more than 40 locations in the U.S., Canada, France and the U.K., according to its website.

The 1996 purchase of the company by Buffett’s Berkshire Hathaway Inc. (A) culminated Ueltschi’s rise from Kentucky farm boy to the ranks of the world’s wealthiest. Forbes magazine estimated his net worth to be $2.1 billion in September.

Buffett’s Praise
Ueltschi stayed on as FlightSafety president after the Buffett purchase until 2003, then served as chairman.

Albert Lee Ueltschi (pronounced YULE-chee) was born on May 15, 1917, on a dairy farm near Frankfort, Kentucky, the youngest of seven children. His father’s parents had settled in the state after emigrating from Switzerland.

Aviation, still in its infancy, captured his attention. He recalled listening, at 10, to radio reports on Charles Lindbergh’s pioneering trans-Atlantic flight.

“There was no question in my mind that I would be a pilot, just like Lindbergh,” he said in a 1997 memoir posted on the company’s website. “I was certain of it.”

‘Fool Kid’
After graduating from high school in 1934, he opened a hamburger stand and used the proceeds to take flying lessons. A year later he borrowed $3,500 to buy an open-cockpit bi-wing airplane, the Waco 10, and made it his next business venture.

“I took people up for a dollar a hop, gave lessons, and even put on air shows. Folks came out to see if the fool kid would kill himself, and like a fool, on several occasions I almost obliged.”

He became chief pilot for Queen City Flying Services in Cincinnati, then signed on with Pan American World Airways. In 1943 he was tapped to fly the twin-engine propeller plane that Pan Am had outfitted to transport Trippe, its founder and president. Ueltschi would hold the job for 26 years, flying the occasional celebrity and learning the business by listening to Trippe make deals.

As more and more companies bought airplanes to serve their top executives, he “began to see possibilities that no one else was able to see at the time,” Robert P. Miles wrote in “The Warren Buffett CEO,” a 2001 book that included a chapter on Ueltschi.

Mortgaged Home
Many of the new corporate pilots were skilled veterans of the Navy or Army Air Corps, Miles wrote, and “once they left the military and began flying corporate jets, their training essentially came to an end.”

So in 1951, Ueltschi borrowed $15,000 by mortgaging his house and opened FlightSafety at LaGuardia’s Marine Air Terminal.

He said Trippe acted as the new company’s “ambassador to the Fortune 500,” urging his CEO friends to send their pilots to the company for training.

In 1954, with money from corporate clients including Eastman Kodak Co. and Coca-Cola Co., FlightSafety bought its first modern flight simulator.

Ueltschi took the company public in 1968 and retired from Pan Am so he could lead it full-time.

He was just shy of 80, and mulling the company’s future, when Buffett invited him to lunch in New York City in 1996. Though Buffett had sent his pilots to FlightSafety for training, it was the first meeting of the two men.

Took Stock
After hamburgers and cherry Cokes, the two men shook hands on a $1.5 billion deal to make FlightSafety an independent unit of Berkshire Hathaway. Ueltschi, whose family owned 37 percent of FlightSafety, chose to take payments in Berkshire stock, which almost tripled in value over the next decade.

“Al was a great visionary who had a profound and positive impact on generations of aviation enthusiasts and professionals,” Bruce Whitman, FlightSafety’s president and chief executive officer, said in a statement on the company’s website.

Ueltschi was a leader of Orbis International, a nonprofit organization that flies a specially outfitted airliner around the world to teach sight-saving surgical procedures. Last month he signed “The Giving Pledge,” an initiative started in 2010 by Buffett and Bill and Melinda Gates to encourage the richest Americans to commit to giving away at least 50 percent of their wealth.

In his pledge, Ueltschi wrote, “My share will be contributed to helping the least advantaged people in the world lead healthy and productive lives through medical innovation.”

He was predeceased by his wife, Eileen, whom he married in 1944. They had four children.