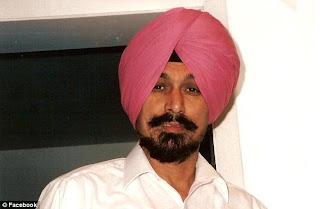 Satwant Singh Kaleka, president of the Sikh Temple of Wisconsin, would do anything for his beloved, tight-knit community, relatives say.
On Sunday, he died standing up to the horror of a gunman's attack on his house of worship in the Milwaukee suburb of Oak Creek. Kaleka, 65, managed to find a simple butter knife in the temple and tried to stab the shooter before being shot twice near the hip or upper leg, his son said Monday.
Amardeep Singh Kaleka said FBI agents hugged him Sunday, shook his hand and said, "Your dad's a hero."
"Whatever time he spent in that struggle gave the women time to get cover" in the kitchen, Kaleka said. One of the women was his mother, who called police using her cellphone while hiding from the gunman.
Satwant Singh Kaleka was one of six killed in the massacre. The gunman, Wade Michael Page, injured three others, including a police officer, before another officer shot and killed him outside the temple. Page was a 40-year-old Army veteran who had more recently gravitated to white supremacist rock in the obscure skinhead punk scene, playing guitar in bands with names such as Definite Hate and End Apathy.
His motive was still largely a mystery. So far, no hate-filled manifesto has emerged, nor any angry blog or ranting Facebook entries to explain the attack.
Kaleka died defending what was his gift to the next generation. Relatives said he selflessly dedicated his life to the members of the Oak Creek temple, of which he was considered the founder. He was also one of the lead investors in the building's construction.
His nephew, Jatinder Mangat, said Kaleka was always willing to lend a hand.
"He doesn't care what he's wearing, what he's doing, he'll be there just for you," Mangat said. "We used to say 'It's OK, we'll have somebody else do it,' and he'd say 'No, no, I'll do it,' even if it (was) a dirty job. He'll do anything."
Mangat said his uncle, a father of two with three grandkids, frequently worked so hard that he looked like "a normal worker with dust over him, paint over him."
Another nephew, Gurmit Kaleka, also spoke of his uncle's willingness to serve.
"He was a great guy who always believed in social service. He was always willing to help anyone who came his way," Kaleka said.


Suveg Singh Khattra also was among those killed Sunday. He was a constant presence at the temple. Most days, his son, a taxi driver, would drop him off there to pray.
The 84-year-old and his wife moved to the United States eight years ago to join their son. On Sunday, the 84-year-old former farmer from northern India was shot and killed.
"He don't have hatred for anybody. He loved to live here," said son Baljinder Khattra, who moved from the family's farm in Patiala, a city in Punjab, in 1994.
Kulwant Kaur, the elder Khattra's daughter-in-law, hid with the other women in the pantry. When a SWAT team evacuated them, Kaur saw Khattra's body lying on the ground.
She tried to touch him to see if he was awake, but officers warned her not to touch anything, said Kaur's son, Mandeep Khattra.
"They told them to keep moving because they were priorities over the bodies," he said.
The elder Khattra spoke no English, communicating instead with neighbors and friends with his hands.
"He (was) very humble. He loved all peoples," Khattra said.
The gunman also took the life of Prakash Singh, whose was living with his wife and teenage children in the temple. Recently, they had moved from India to join the Sikh priest in Wisconsin.
Navdeep Gill, an 18-year-old temple member from Franklin, said Singh had rented an apartment nearby and his family was due to move in by the end of the month. Singh's son and daughter will start school soon; the daughter is in high school and the son is going to be a freshman in high school.
As a Sikh priest, Singh would have performed daily services, which may have included recitations from the religion's holy book, leading prayers and lecturing on how to practice Sikhism.
Gill said Singh had a fun-loving personality — "telling jokes and whatnot" — and looked nothing close to his age of 39.

The other victims were identified Monday as Sita Singh, 41, Ranjit Singh, 49, and Paramjit Kaur, 41.