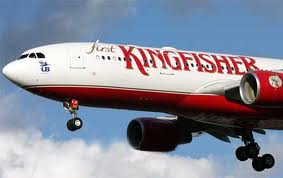 A section of pilots of near-bankrupt Kingfisher Airlines today went on strike, second time in the month, demanding immediate payment of March salaries, leading to cancellation of seven flights from Mumbai.

"A section of Mumbai-based pilots have gone on strike due to repeated failure to keep up with the promises (made by the airline management)," airline sources told PTI.
Some flights from Mumbai have already been cancelled due to the pilots strike and many more cancellations are to follow, they said.

Seven Kingfisjer Airlines flights from Mumbai have been cancelled, a Mumbai International Airport Limited (MIAL) spokesperson said.
The strike comes after a meeting between a group of pilots and airline Chief Executive Sanjay Aggarwal in the city to enquire about the March salaries, ended without yielding any results, sources said.

"About 15 pilots had gone to meet the CEO to enquire about the March salary since the pilots were promised by the managment that every one would be paid by August 17. They were made to wait for an hour and half and then told that the chairman (Vijay Mallya) has said they will be paid by Tuesday," they said.
The pilots did not accept the assurance as the Chairman has repeatedly backtracked on his earlier commitments on payment of salary dues and, therefore, decided to strike work, sources said.

Kingfisher Airlines, whose accounts are under Corporate Affairs Ministry's scanner, has not made payments to majority of its employees since March.
The corporate affairs ministry has recently ordered an inspection of the account books of debt-ridden airline after receiving complaints from stakeholders alleging violation of certain provisons of company law.