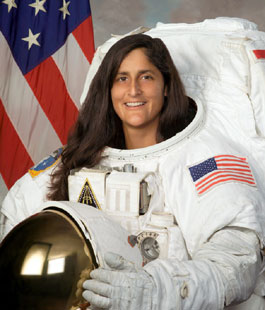 Houston, Jul 17 (PTI) Record-setting Indian-American astronaut Sunita Williams along with two other cosmonauts today successfully docked their Soyuz spacecraft with the International Space Station (ISS) for a four-month long stay during which they will conduct over 30 scientific missions.

"Everything is perfect," Malenchenko radioed Russia''s Mission Control Center in Korolev after docking with the space station.

Their Russian spacecraft -- Soyuz TMA-05M -- docked automatically with the Rassvet module at around 10:21 IST.

The crew took off to the ISS successfully from Baikonur cosmodrome in Kazakhstan on Sunday for a four-month long mission to the space station.

This is the second space mission for Williams. She also holds the record of the longest spaceflight -- 195 days -- for woman space travellers.

The crew which will return home in mid-November is expected to conduct over 30 scientific missions during their stay aboard the ISS.

In the space, Williams and her team of astronauts also plan an orbital sporting event to mark the Summer Olympics in London.

Williams and her crewmates will join the three others already living on the space station : commander Gennady Padalka of Russia, his cosmonaut colleague Sergei Revin, and NASA astronaut Joe Acaba, who have all been in space since May.

The six crew members will work together for about two months.

We request All Politicians No Politics on this Issue Please